Dove Shows Marketers How They Can Get Political 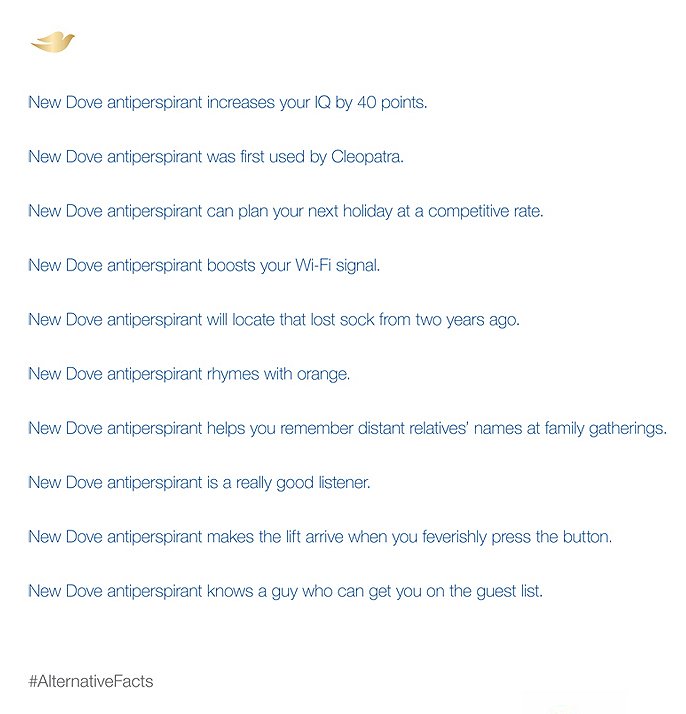 I’ll admit, I’m a big fan of Dove. Not only do I use the brand’s products religiously, I also believe the marketing team has really stepped up its game over the past five years. I’m a staunch fan of the brand’s approach, which combines commentary on popular culture and social issues. Campaigns, even simple tag lines, successfully resonate with me and other customers on a personal and emotional level. (If you need more proof, check out the #MyBeautyMySay commercial. It’s powerful stuff.)

The brand is still riding high from its 60th birthday, which included a commemorative #RaiseTheBeautyBar social campaign. Social followers were asked to answer one simple question:  “How will you continue to #RaiseTheBeautyBar?” Responses are selected and transformed into inspirational social images, which followers can share and post on their own.

But within the mix of this campaign, Dove got political.

On the heels of the #AlternativeFacts craze, Dove quietly released a new print ad in the UK, which was created with the help of WPP’s Ogilvy. Published in The Guardian and The Times of London, the ad included a list of “facts” about how Dove products can benefit your life and why Dove is, ahem, “the best.”

Want to raise your IQ? Want a stronger Wi-Fi signal? Want to get on the guest list? Dove antiperspirant is for you! The ad is reminiscent of the marketing tactics of yore, which magnified — even completely made up — the benefits of a product. But of course, there’s also a bit of political commentary. Dove shows, in a tongue-in-cheek way, just how ludicrous “alternative facts” are when they’re applied to everyday products and scenarios.

The ad was only released in the UK, and it’s not clear whether it will be published elsewhere. But that doesn’t make a difference, because it’s already making the rounds around social media and is being shared via a series of major publications.

I can understand why many brands don’t like getting political. When you have the wrong messaging, or execute poorly, you’ll quickly isolate — even anger — your audience. Of course, you need to take a hard look at your industry and target consumers to determine whether getting political makes sense. If it makes sense for your brand (or you’re too eager to speak out to care) there are a few best practices from Dove I think you can apply:

What are your thoughts on Dove’s new ad? Is it effective marketing, or is the brand merely inserting itself in politics the wrong way?